Thursday, the 10th of December is Human Rights Day, and the Cubans are celebrating
it. The Revolution of 1959 meant that it was now the Cubans they themselves who
decided in their own country. The big landowners, the foreign companies, the
gangsters, the lawlessness and the USA that pulled the strings, are dealt with. The
Cubans have created a welfare society that is like a dream for the peoples of the third
world and is also admired by many in the rich world.

In Cuba there is:

FREE HEALTHCARE for all. There are family doctors in the most remote parts of
the country, polyclinics, specialist hospitals and much attention is given to preventive
health care.
FREE EDUCATION for everyone, from preschool up to the universities where
student housing, course literature etc. is included. Extensive adult education.
CULTURE AND SPORTS. Culture is a central part of life. Mass participation in
sports has created the conditions for Cuba’s international sports successes.
THE ENVIRONMENT. Priority is given to the environment, everything from
involving the school children to the national environmental planning. Cuba stands
alone as the country that has a high level of welfare while not consuming more than its
fair share of the planet.

Together, the Cubans have accomplished all this. It would not have been possible if
the people as a whole had not agreed about how their society should be formed,
governed by the people, implementing People’s Power; democracy in the true sense of
the word. How is it then that much of mainstream media and right-wing politicians in
our country and in the rest of the Western world portray Cuba as a dictatorship?
The answer is quite simple.
• They do not tolerate the existence of Cuba’s socialist example.
• They do not tolerate that in Cuba it is not free for foreign capital to start companies,
In Cuba the government chooses to cooperate only with such foreign companies that
meet the country’s own needs.
• They do not tolerate Cuba setting conditions and limits on the amount of wealth and
real estate a person or company can accumulate.
• They do not tolerate that foreign organizations are not allowed to gain influence in
Cuba by bribing a political party. Political parties have no place in Cuba’s parliament.
Cuba has an election system of voting for individual candidates, not parties.
The role of the Cuban Communist Party in society is to be ideologically guiding and
not to participate in decision-making. This is a task for the elected delegates. The
elected delegates have an obligation to regularly report about their work to their
voters. The mass organizations such as the Federation of Cuban Women, the trade
unions and the cultural workers all have channels to the decision-making assemblies.
The focus of the work is to create consensus, not to snatch benefits at the expense of
others. All this is explained in the Swedish-Cuban Association book THE
CONSTITUTION OF THE REPUBLIC OF CUBA of the year 2019. It has the whole
new constitution translated to Swedish. It can be bought in bookstores or directly from
www.svensk-kubanska.se

The people in the Western world that aggressively criticise Cuba unmask themselves
when they accuse Cuba of being a dictatorship. They talk about multi-party systems,
well aware of how the Western world has used such systems to gain influence on
developments in third world countries. In the same breath as they talk about
democracy, they talk about the need for a market economy, well aware that a free
market economy would give free rein to foreign profiteers.
Ever since the Cuban Revolution triumphed, the United States and its allies have tried
to crush it. Through threats and blackmail against other countries’ companies, despite
the United Nations’ repeated condemnations, the United States has subjected Cuba to
the worst and longest economic blockade in history, as close to an act of war as one
can get.
Now, after four years with Trump, the effects of the blockade are particularly severe.
Trump is also ultimately responsible for terrorist threats against Cuba. From Miami
come promises of rewards to those in Cuba who set police cars on fire, firebomb
shops, etc. Read more at www.svensk-kubanska.se

Despite the hostile actions of the United States and the economic difficulties caused by
the blockade, Cuba is pursuing its international solidarity. Since 1960, Cuba, in
agreement with 36 different countries, has sent medical brigades to assist in severe
disasters such as hurricanes and earthquakes. Now during covid-19, Cuba’s Henry
Reeve brigades have assisted 40 countries in the fight against the pandemic. For
Cubans, solidarity is part of the meaning of life. For Cubans, solidarity is a human
right. The world needs more countries like Cuba! 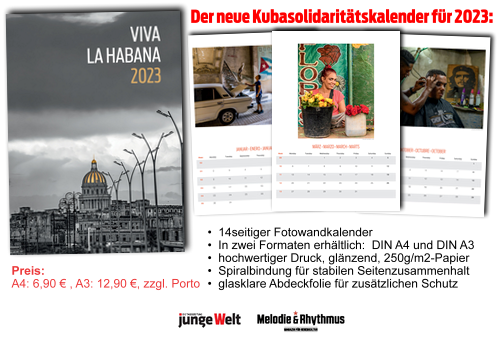